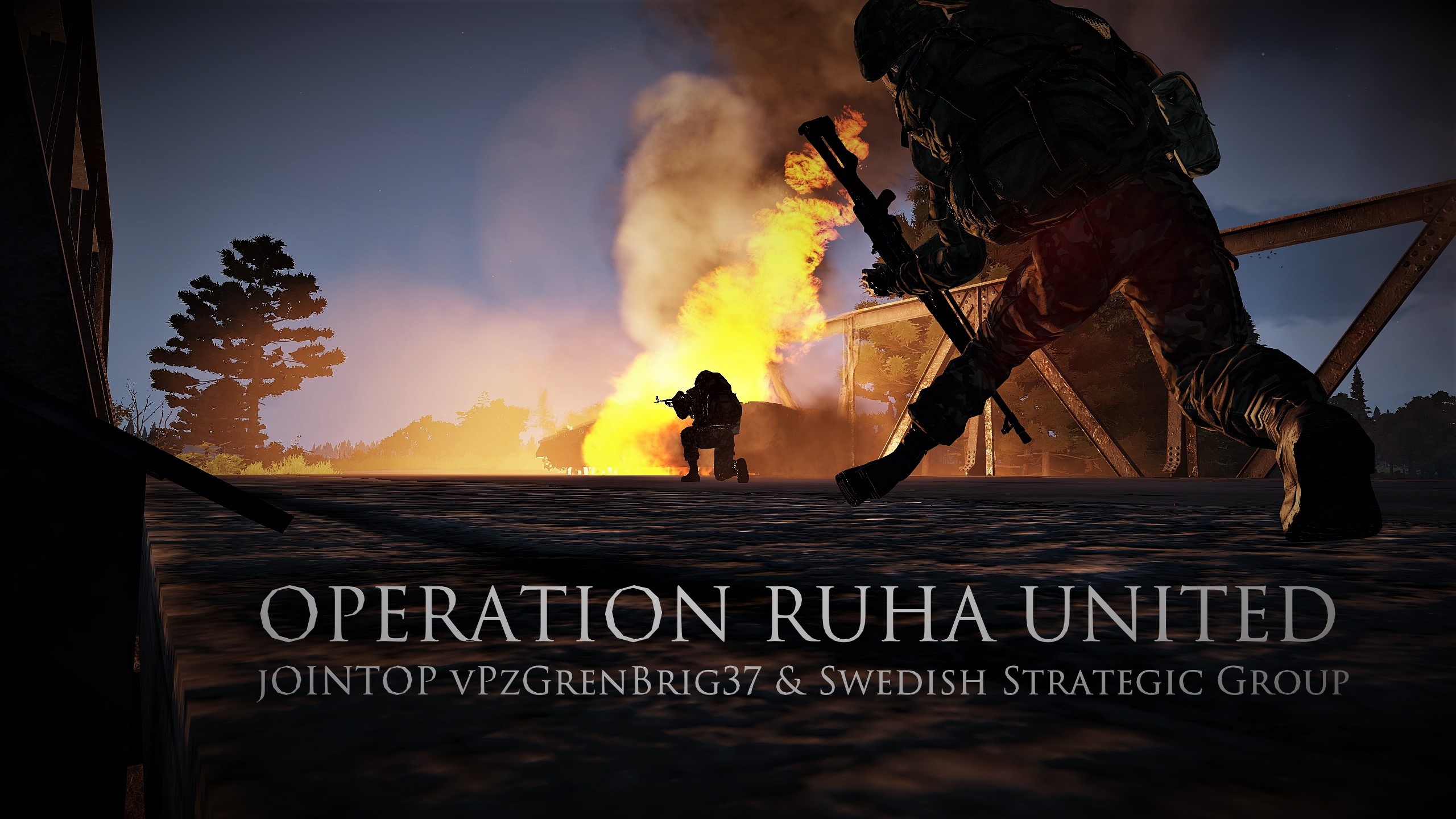 SITREP
We managed to destroy the enemy artillery in the area and even secure the enemy forward command post SPATEN. This was a heavy blow towards the enemy but as the icing on the cake we even managed to secure a POW. This AFI general put up some resistance at first but after a few hours of interrogation he gave us information on where the enemy anti-air was placed. He was also very “glad” to inform us of a hidden ammunition storage in the forest.

We have moved up our artillery and IVFs to a new forward operating base called “FOB SPATEN”.

The enemy has tried to push us back but aerial reconnaissance has shown us that the enemy is mobilizing and are moving toward the town of Ruha where they are going to unite and attack us in force. We have to secure this position and defend it so their forces cant unite before we move against the enemy main base in the area. Since the finnish troops have been successful in their defence in the province of SalmanJarvi we expect them to beginning to get desperate in their efforts to destroy our presence in Ruha. Expect a hard fight!

PREVIOUS SITREP
After a failed coup attempt in Finland in early 2018 where the newly formed opposition party Aitiyspakkaus Aakkostaa Fabuloida (AAF) tried to take control over the land by threats and other hostile actions. They are suspected to have lead attacks targeted against politicians and important social functions by blackmail and even murder.

In the middle of the cold finnish spring of 2018 cyber attacks targeted against electricity and water supply made the country go to a standstill. In the freezing weather and the population frooze in their houses when they no longer could uphold electricity for heating causing mass casualties. AAF claimed this was the consequence of the lack of proper leadership and called for a vote for change of government in the country. The government decided against a new vote since they claimed AAF was responsible for the mayhem that had claimed so many civilian lives. AAF:s response to this was to claim that the government was illegitimate and fighting erupted. The scale of the fighting started small with engagements with police and military but soon it was obvious that AAF had support when they fast increased in booth troop numbers and equipment and in June it turned into a civil war.
In the start of July the government of Finland got access to proof that AAF was supported by a foreign country and called from help from the European Defence Alliance (EDA). After a emergency meeting both Germany and Sweden answered the call from help. Sweden sent a platoon of airborne infantry and a two JAS-39 Gripen. Germany sent their finest Mechanized infantry platoon and together secured the airport of Metsälä on the 24th of July 2018.

The finnish forces that previously had defended Ruha have all been mobilized against a offensive of AAF forces in the province of SalmanJarvi so only EDA troops are left in the area. Our presence in the area has not gone unnoticed and recon has shown that the enemy is mobilizing to move and secure the Metsälä airfield and push back our presence in the region. We expect a counterattack sooner during the day. We have noticed a opportunity to hit them first and destroy their both artillery and forward command posts before they are mobilized and ready.

BRIEFING
The enemies are advancing towards our troops but we will stop them in their tracks by securing the town of Ruha, OBJECTIVE CROSSROADS. We expect troops from both OBJ HEFEWEIZEN and reinforcements from the north part of Ruha to move in to this area so be ready for a assult from both directions. When you have weakend their advancement push forward and secure their ammunitionstorage, OBJ CARLSBERG, and destroy their anti-air capabilities, OBJ AA. This will weaken their ability to continue to fight in the area and open up for our areal support in the north part of the AO.
OBJ HEFEWEIZEN is their main base in the area. Secure it and destroy/capture all the troops in the area.


INTEL
From our estimations there are somewhere around 200 - 400 AAF soldiers in the area but it could be a lot more. The enemy has access to advanced weapon systems, mechanized troops, heavy artillery and possible a few tanks. Most of the mechanized troops are located around OBJ Hefeweizen but there could of course be more hidden in other places.

Its possible that the enemy are using anti-tank mines to defend their strongholds so avoid probable roads of advancement.

Anti-Air is positioned at OBJ AA so be careful in use of air units around this area until it's destroyed.

Most of the civilian population have left the area since the fighting erupted. Be careful though since a few might still be left and we want to minimize civilian casualties.


WEATHER
We expect Heavy rain and wind around 16 m/s northbound.

RESPAWN
You will respawn at FOB METSÄLÄ. Respawned units will be transported back to the battle using helicopters. If your group needs a new IFV, those are positioned at FOB SPATEN. Inform your pilot you want to be dropped off there, otherwise you will be dropped off at the company LZ.

All respawned units are to group up and keep together until they can join back to their initial squads. The highest ranking member of the group takes command until the group is back together with their own forces.

If the pilots are busy and unable to pick a player up from respawn, the alternative is to use Respawn cars. The respawn cars called “Respawnbil” will be marked as such when you “scroll” near them and is also marked out on the map. These can be used to drive to the AO. The cars will despawn when you leave it for more than 10 seconds so can be left anywhere you choose. The drive distance is quite long so should only be used as a last resort. Do not put any gear in the car, it will disappear when the car despawns.

MEDICAL - MASS CASUALTIES / NEED OF MEDICAL VEHICLES
If a soldier sustain more wounds than the squad medic they need to be transported to the Casualty Collection point (CCP). Its important that the squadleader informs the platooncommander that there are need for a ambulance helicopter so he can order it from the company commander. Note that only Medics can use PAKs, so the squad Medic will have to accompany the wounded to the CCP. It will also be possible to resupply the medic at this position.

If there are a mass casualties that the platoon cant solve themself they are to retreat to a CCP. The position of the Company-CCP is up to the company commander but will usually be placed at the closest secure LZ. At this position there will be an ambulance helicopter where Personal Aid Kits (PAK) can be used (PAKs are placed in the helicopter).

All leg wounds can be fixed by using bandages (no splint required). Both platoons are to unite to defend against the enemy offensive at objective CROSSROADS. The first part of the objective aim to secure the area behind leading line #1 and set up defensive positions and wait for enemy offensive.

SSG are to HALO to primary LZ SWAMP, secondary LZ FIELDS. Exact dropzone will be given during platoon briefing depending on weather/wind. If high wind HASD will be used. HALO-height 3500 m.


vPzGrenBrig37 and Tango Lima are to be transported with Chinook to FOB Spaten where their vehicles are placed. vPzGrenBrig37 are to advance north and meet up with SSG.


Tango Lima are to fire artillery over the forrests around LZ Swamp to cover infiltration with parachutes. Will stop firing when planes are 1 km from dropzone. After this they are to move up with vPzGrenBrig37 and set up repair / artilleryposition at AS Retreatpos #2. vPz are go secure AS Retreatpos #1 and then secure terrain up to Def. Pos. 2. When there contact company commander for new orders and may be deployed in defensive positions depending on where mostly needed.


Resupply
LZ Swamp or LZ Fields will be used for resupply. Both platoons will be resupplied before moving from OBJ Crossroads. SSG are to pick up explosives and detonators. Known position of enemy anti-air. Needs to be destroyed to open up forward LZs. Prioritized target. vPzGrenBrig37 are to secure this position. SSG will be ready to support the attack from the northern woods before moving against OBJ CARLSBERG.

SSG will secure and destroy all enemy ammunition at OBJ CARLSBERG. Yellow lines are for SSG.

Important to know that these are for giving a basic orientation on the advancement for both platoons and should be used to guide the advancement. Both platoon commanders are to decide if they need to move away from the line because of the terrain or because of engagement of enemy forces. It's important though to try to avoid blue on blue situations during the advancement.

Leading lines
The platoons will use leading lines to synchronize their advancement. There are no limit on their limits to move sideways to help the other platoon to advance but its important that the movements are planned using firesectors to avoid blue on blue. The platoon commander is responsible to keep their troops updated on fire limits right/left during the engagements.

If risk for blue on blue because of movement inform company commander before starting advancement. Possible ways to give fire limits is using map markers, compass, terrain objects.

Firesupport
We have access to both firesupport from artillery and CAS. Artillery will only be used beyond the “next” leading line to avoid blue on blue situations.

CAS will primarily be controlled by Oscar Lima. 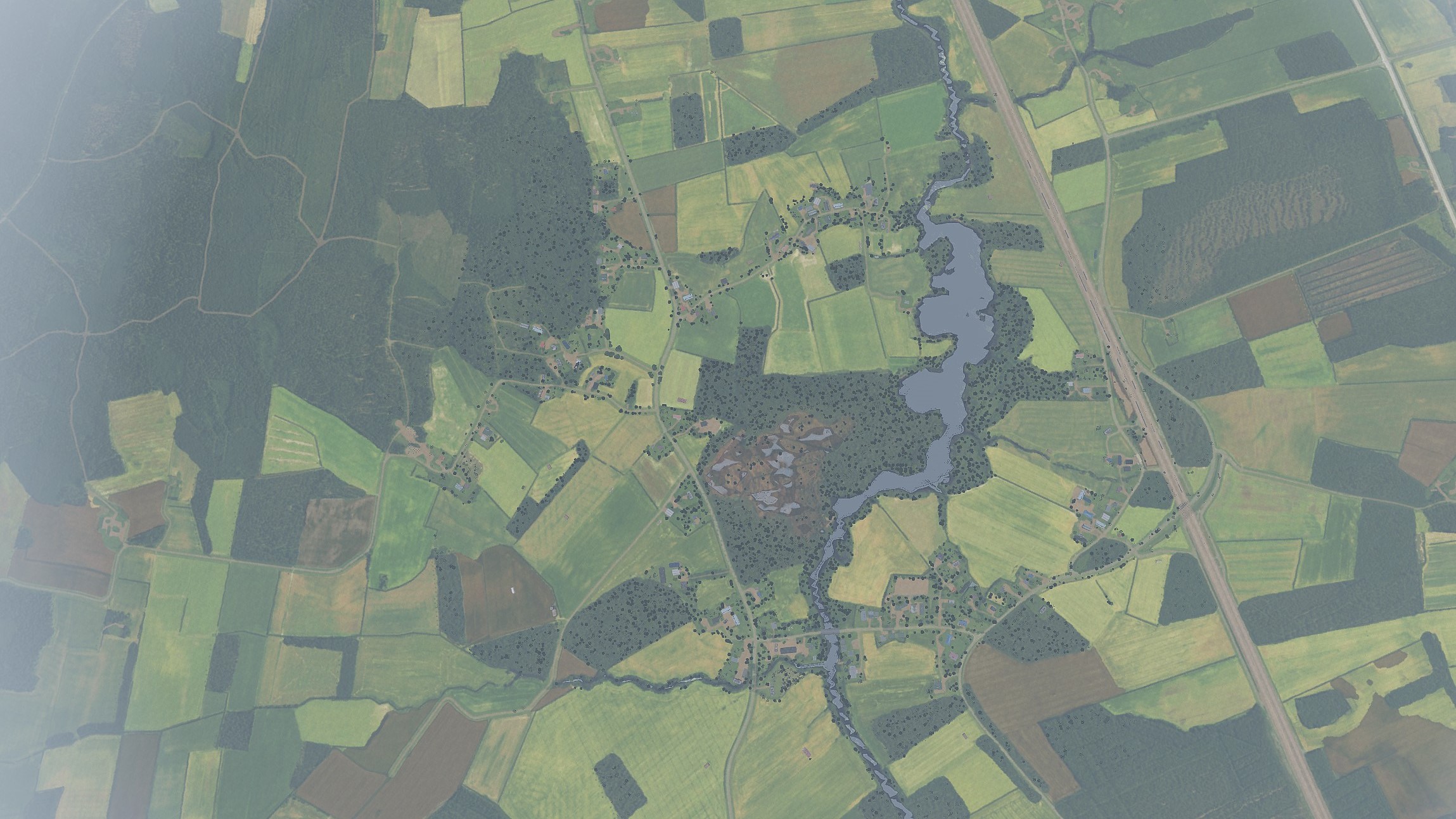