In April 2018 numerous surveillance satellites over Poland went suddenly and most unexpected black. The satellite cover along the eastern Polish NATO border became all dark. Disturbance due to solar flares was the first explainable reason to this technical error. After several days attempting to regain power the satellites were officially declared lost by NATO high command. Three weeks later reserve satellites were redirected in orbit to gain short but limited temporary coverage over local areas along the border. This is when a fatal military strategic error is discovered. A mistake later to be erased by governments in history books. When conducting a security satellite sweep, movement by foreign military vehicles together with several military installments were suddenly noticed in the small region of Rozcheiw inside the Polish border. Immediate diplomatic actions were taken against Belarus to avoid a disastrous clash on this possible mistake. The answer from the Belarus government was equally surprising as it was disturbing as they proclaimed no knowledge or information regarding such actions. This was all a dark lie…

This is the true story of what really happened in May 12th, 2018 in the region of Rozcheiw, Polish border. A world in the blind without any knowledge of a threatening full-scale war in Europe. Governments in total silence while diplomatic efforts crash landing. This was later named as Operation Lid On, but it was all erased in the history books and declared as minor diplomatic issue.
This is also the story of those brave soldiers who took on the threat and changed the possible catastrophic outcome…

Stationed at NATO CFoB “Green Forest” (NATO Command Forward Operational Base Hub) at the Polish border in Rozcheiw region is the German vPzGrenBrig37. A Special unit assigned by NATO to centrally command all operational decisions along the border.

“Alert! Alert! Alert!
This is a MDTA situation. High-risk threat is imminent. Uncertain number of Russian ground forces is closing in quickly heading directly to NATO CFoB. Mobilize all efforts immediately on Level Dark. We repeat – this is a Black Op. An international QRF consisting of Swedish Strategic Forces, also under MDTA restrictions, are inbound to assist on your coordinates ETA 30 minutes.”


Objective LINE BACKER – Protect the CFoB
Everything looks like we’re having a full assault on our base. Russian forces are moving in quickly. The vPzGrenBrig37 is down there with hell unleashed on them.
- Defend the NATO CFoB at all costs and drive back the hostile forces. 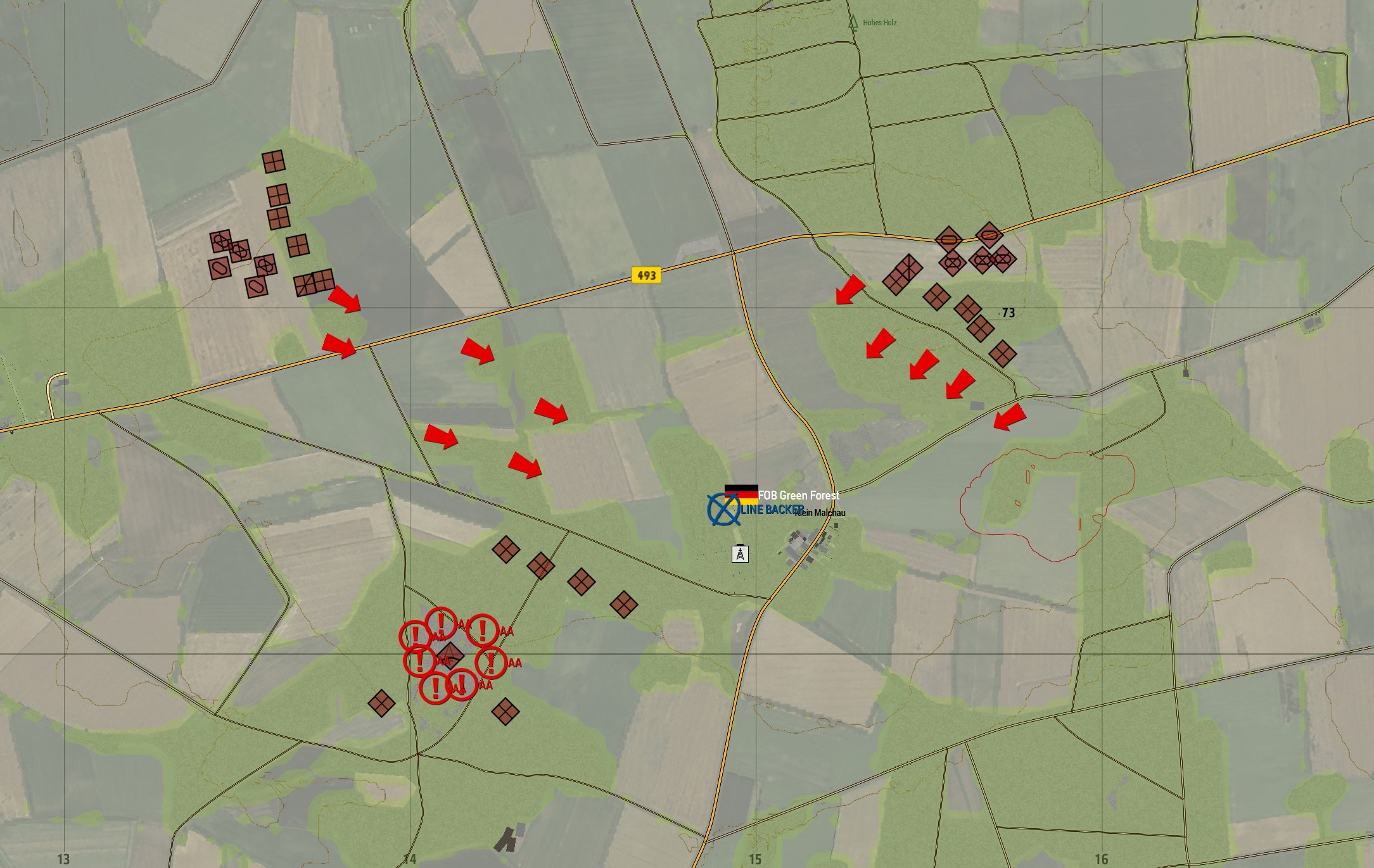 Objective SHOW OF FORCE – Mobile AA threat
If we are able to press back the hostile forces, we need to identify, and secure possible high strategic target areas identified according to previous intelligence reports.
- Coordinate and Neutralize the possible Mobile AA threats at sites Eagle Flies (Echo Foxtrot) 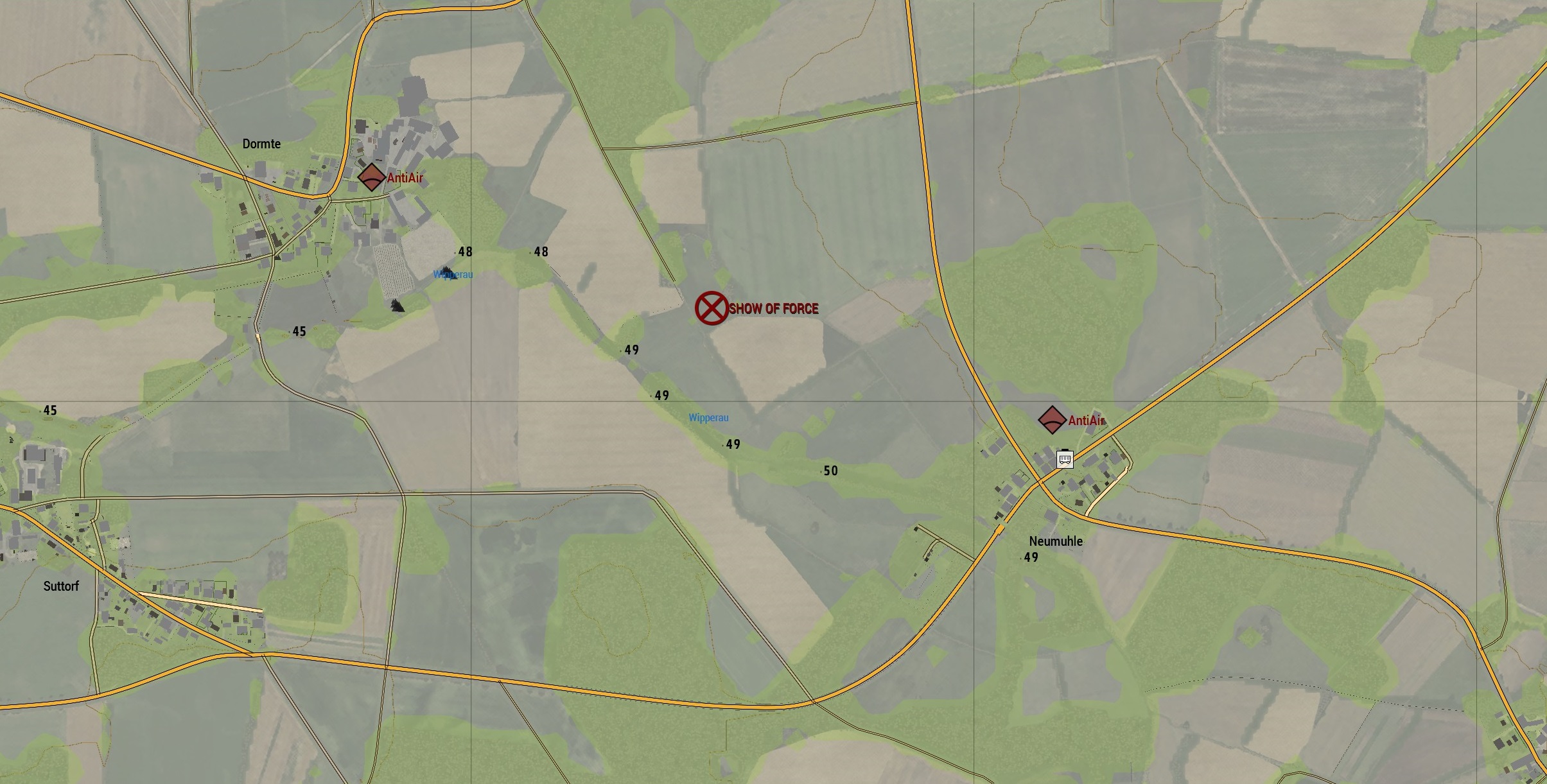 Objective STRIKE BACK – Tactical Command Base
Drones have located the Russian Forward Tactical Command Base. We need to strike hard and effective to drive out all hostile troops. It is most imperative that this objective must be successful as a final achievement to once and for all solve this “diplomatic” crisis. Failure will result in catastrophic results, both military and politically.
- Neutralize, drive out and terminate all possible threats at site Lion Quarters (Lima Quebec) 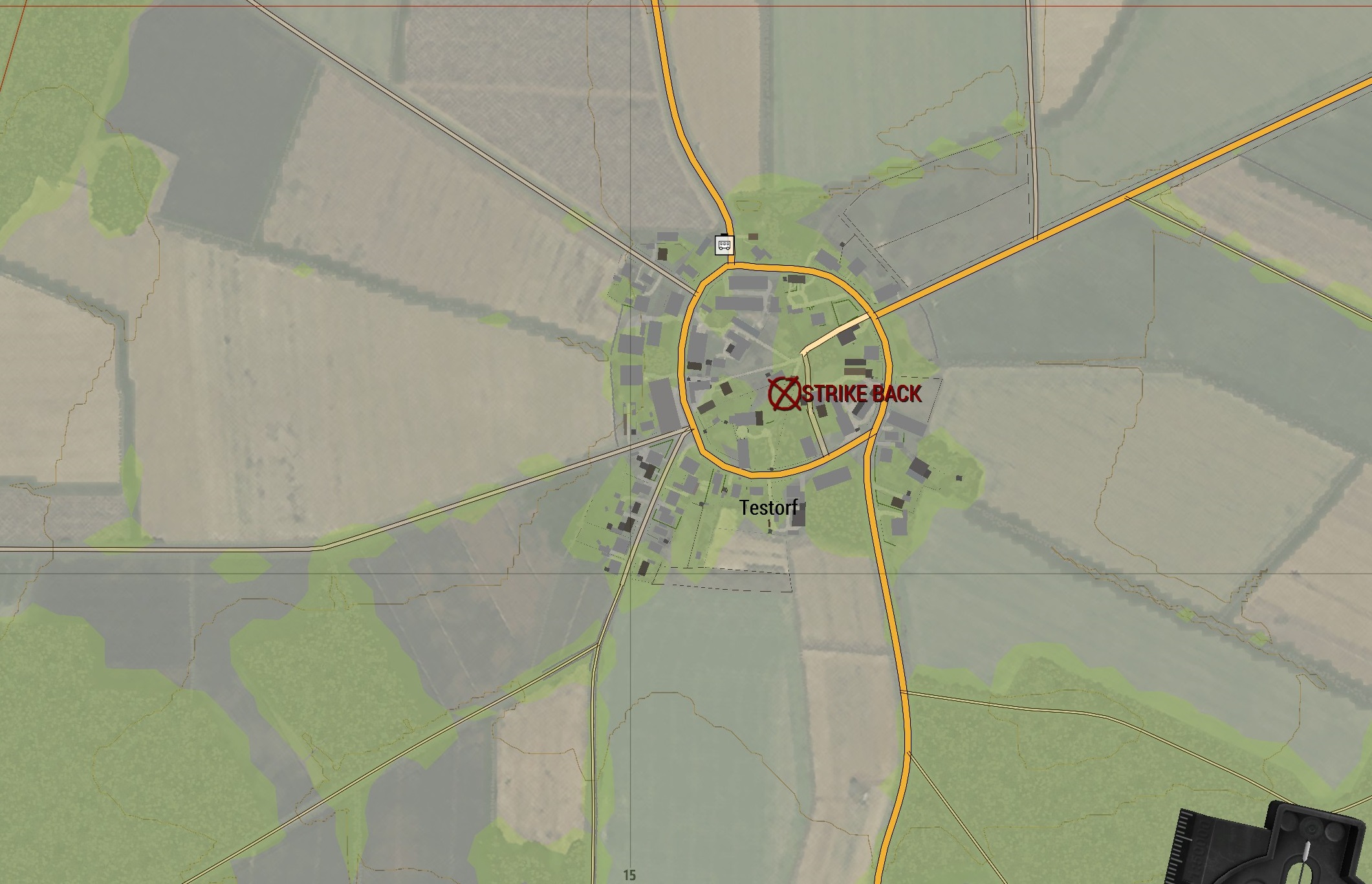 GOOD LUCK and may the winds be with you! 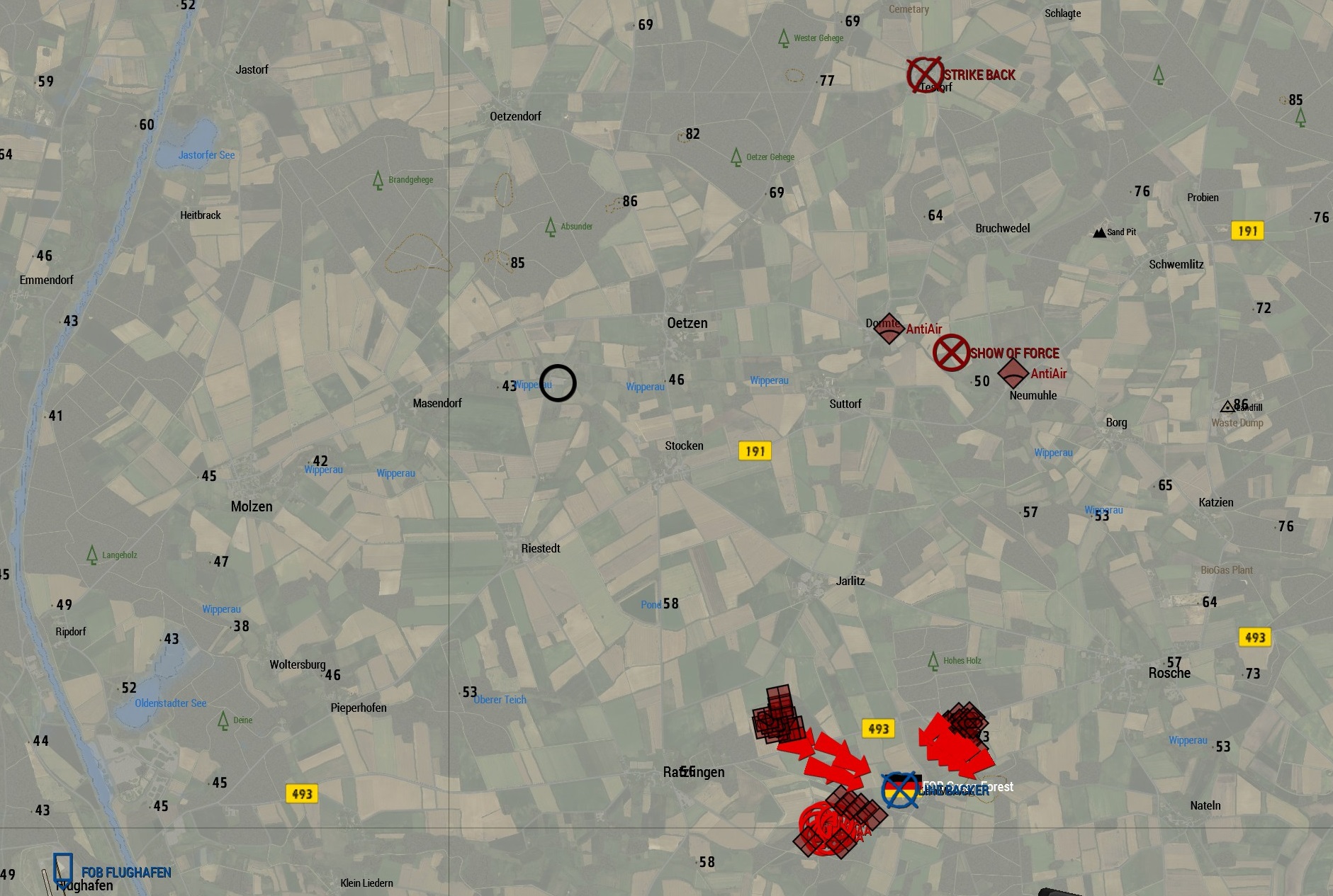 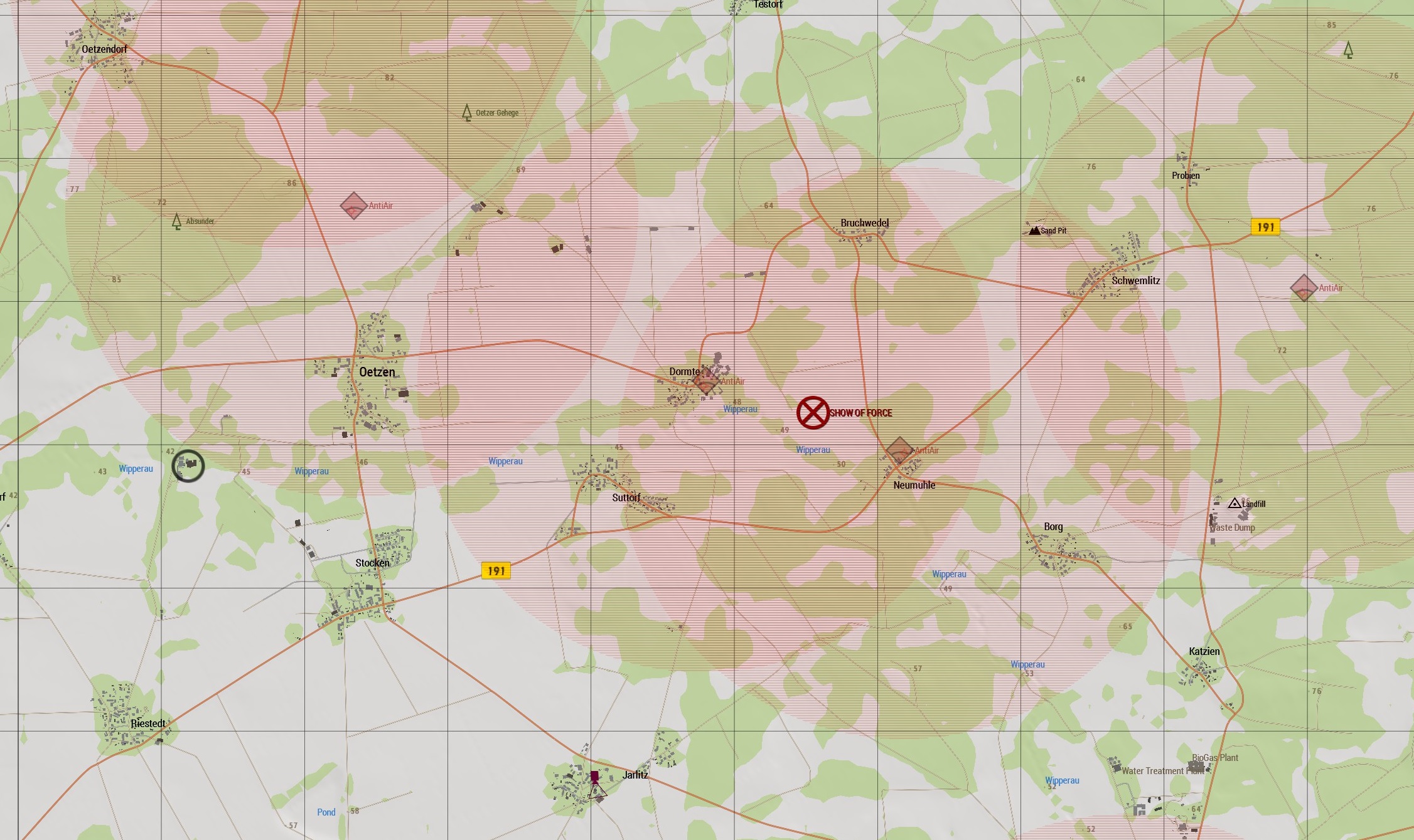 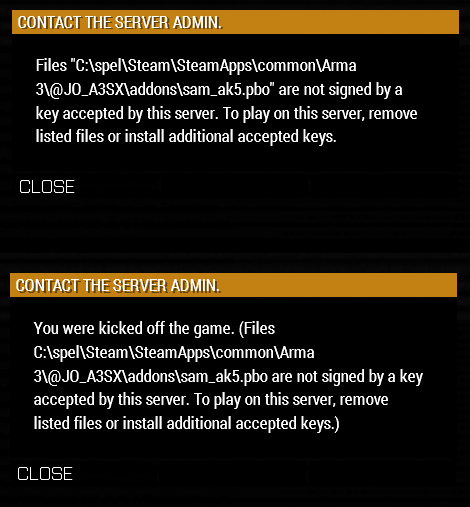